aShows a small degree of p1 selective blockade unconnected to b-blockade such as sweating, irritability, nausea, and frequency of micturition, can also be helped by b-adrenoceptor antagonists. This may be true, but it does not follow that these are direct consequences of b-blockade. If a cardiac symptom such as palpitations is prominent in the expression of anxiety, its alleviation will reassure and help the patient so that other symptoms of anxiety are reduced as well.

The need for selection in b-blockade is less relevant in the treatment of anxiety unless the patient has cardiac comorbidity. The reduction of tremor is a result of b2-blockade, and so nonselective b-adrenoceptor antagonists are preferred for this indication. Tremor is reduced at all frequencies and irrespective of its pathology, so the tremor accompanying treatment with lithium, the syndrome of parkinsonism, whatever its cause, and essential tremor are all equally influenced by the tremor reducing effects of propranolol and similar drugs. Exactly the same is true of anxious tremor, and the efficacy of nonselective b-adrenoceptor antagonists is most marked when tremor is a highly important and sensitive adverse or troublesome effect. Thus, the public speaker who is afraid of tremor affecting vocal performance, the snooker player who wishes to keep his cue direction absolutely still, and the violin player who wishes to confine tremulo and vibrato playing to only selected parts of public performance will all receive benefit from the effects of nonselective b-blockade. Indeed, such is the concern of the advantages gained by these drugs in competitive sports such as snooker and archery that they are now generally banned. The main clinical usage is in specific forms of ► social anxiety (phobia), in which blushing and tremor are prominent symptoms.

Other potential uses of P-adrenoceptor antagonists include the reduction of aggressive and challenging behavior, the treatment of schizophrenia (now virtually abandoned), and the management of movement disorders such as ► akathisia and ► tardive dyskinesia. Here, both the evidence and the ways in which P-adrenoceptor antagonists might assist in reducing the symptoms are very limited. It appears unlikely that peripheral P-blockade is relevant here, except possibly with the more simple movement disorders, but no other good explanation of action is forthcoming.

Value in Psychiatry and Psychology

The clinical usage of P-adrenoceptor antagonists drugs is discussed elsewhere in this volume (► generalized anxiety disorder, social anxiety disorder), and although there has been very little research into their efficacy in most recent years, they are still frequently prescribed for up to 10% of patients presenting with various forms of anxiety in primary care. In general, it is reasonable to consider the use of a P-blocking drug at least on a temporary basis, for patients who are especially troubled by symptoms such as blushing, tremor, palpitation, and general concern about excessive cardiac activity. They may also be helpful in reducing some of the withdrawal symptoms associated with cessation of benzodiazepines and similar drugs when they are accompanied by marked somatic accompaniments (► benzodiazepines, ► withdrawal syndromes). Most of the drugs are best given on an as required basis rather than regularly.

Tyrer P (1992) Anxiolytics not acting at the benzodiazepine receptor:

Do You Feel Anxious In Social Situations? Follow The Principles Within This New Guide And Never Let Anxiety Get The Better Of You Again. Download To Discover How To Live Your Life Free From Anxiety Starting Today. 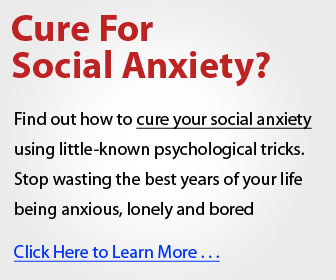