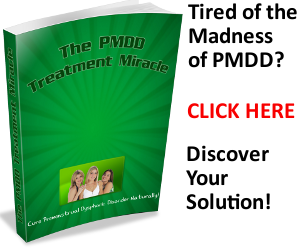 One of the most well-studied mood disorders, with respect to the influence of ovarian steroids on mood, is PMDD. In any studies of this disorder, it is necessary to define carefully the study population and limit both endocrine investigations and treatment to women with clear luteal phase depressive symptoms who are well during the follicular phase; many more women report significant variations in mood premenstrually in retrospective reports than are found to have symptoms with prospective studies. In a study that used optimal sampling frequency to investigate LH and FSH, pulse frequency, and amplitude in follicular, midluteal, and late luteal phases of the menstrual cycle and examined estradiol and progesterone levels at these three time points, there was no difference between estradiol and progesterone at any time point between women with PMDD and control women (Reame et al. 1992). LH pulse frequency was also similar in both groups, with parallel changes across the menstrual cycle. Thus, these and earlier data (Rubinow et al. 1988) do not suggest an alteration in GnRH secretion or ovarian steroids in women with PMDD. Nevertheless, several studies have suggested that hormone manipulations can improve the symptoms.

One of the best-documented effective treatments is elimination of menstrual cycling with leuprolide, a

GnRH agonist that improves mood. A number of studies found that leuprolide was highly effective in reducing symptom severity and cyclicity in PMDD patients (Mortola et al. 1991; Rosenbaum et al. 1996; Schmidt et al. 1998), although an increased rate of depressive-like symptoms has also been reported during leuprolide treatment (Steingold et al. 1987; Zorn et al. 1990). Leuprolide also leads to hypoestrogenism, which affects both bone density and cardiovascular disease; thus, it is necessary to add both steroid hormones. In the study by Mortola et al. (1991), just the addition of a placebo, with the suggestion that it might make mood symptoms worse, caused a significant worsening in mood symptoms. However, addition of conjugated equine estrogen with or without medroxyprogesterone acetate (MPA) while patients were still on leuprolide did not lead to a relapse in depressive symptoms. Not all studies have agreed that progesterone can be added back without significant worsening of symptoms. Schmidt and colleagues studied a group of women with PMDD whose symptoms were significantly improved by leuprolide, as well as a group of control women with no previous mood symptoms who were also taking leuprolide. They demonstrated a return of symptoms following administration of estradiol or progesterone but not with placebo. In the control women, none of the hormone replacements altered mood (Rubinow and Schmidt 2006). Finally, progesterone itself has been used for the treatment of PMDD despite its documented lack of effectiveness. The results of a recent Cochrane Database review of 17 randomized, placebo-controlled trials were equivocal, and the authors were unable to determine whether progesterone was useful or ineffective in the treatment of PMDD. They concluded that there was not enough evidence to say whether progesterone was helpful or ineffective (Ford et al. 2006).

Since it is generally believed that the symptoms of PMDD are related to delayed effects of progesterone on mood, several studies have investigated the effects of RU486, a progesterone antagonist, on mood symptoms. In the studies of Schmidt et al. (1991), creation of an artificial follicular phase during the second half of the menstrual cycle by the use of RU486 plus human chorionic gonadotropin did not result in a reduction of mood symptoms. Likewise, blockade of progesterone's action led to early menses, with depressive symptoms still occurring. The study by Chan et al. (1994), using a randomized, double-blind, placebo-controlled crossover design for 6 months, showed no effectiveness of RU486 on mood symptoms. Thus, although it is generally believed that PMDD is related to changes in CNS neurotransmitter systems caused by progesterone, the data do not support the conclusion that progesterone blockade affects these mood symptoms. Rubinow and Schmidt (2006) have proposed that PMDD represents an abnormal response to normal hormone changes or levels that occurs in a small proportion of genetically susceptible women and is most likely associated with gene polymorphisms involved in the gonadal steroid signaling pathway.

Another period of increased vulnerability to depression in women is the postpartum period. Although it is known that this period is accompanied by a sudden drop in progesterone and estradiol levels, there is limited information available on how this relates to the onset of depression. Postpartum depression is associated with a history of depression (O'Hara 1986; O'Hara et al. 1991), marital disharmony, and a higher number of stressful life events in the previous year (Cox et al. 1982). Gregoire et al. (1996) reported that transdermal estrogen is an effective treatment for depression. However, the group of women studied was small, heterogeneous, and ill-defined, and no information was available on whether these women had a new onset of depression or a prior psychiatric history. Furthermore, some of the patients were being concurrently treated with antidepressants.

How to Stop Your Depression Now

Finally, Retired Clinical Counsellor Reveals the Secrets Successful Psychiatrists and Psychologists Don't Want You to Know. How to Stop Your Depression Now Reclaim Yourself and Live Again Get the Depression Busting Tools You Need To Win the War Against Depression. Depression is an illness that many people often sweep under a rug. However if depression is left untreated... Your life can become a living nightmare. Depression is a growing epidemic in the US, but it never gets the urgent attention it deserves. You need help and you need it now.